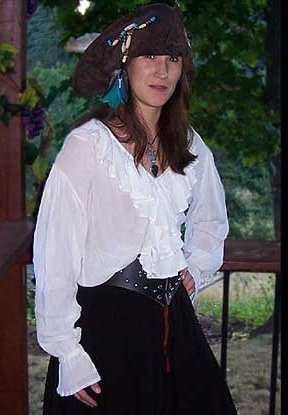 Mary Read was born in London to the widow of a sea captain. When Mary’s older brother, the legitimate child in the family, died, Mary’s mother began to disguise her as a boy, so as not to lose the financial support the child received from his paternal grandmother. The grandmother was apparently fooled, and Read and her mother lived on the inheritance into her teenage years. Still dressed as a boy, Read then found work as a footboy but became bored with the position and instead found employment aboard a ship.

However, excessive amounts of abuse led her to jump ship and join the British military. Read proved herself through battle and fell in love with a fellow sailor. She and the sailor married and, with his military commission, opened an inn named “The Three Horseshoes”.

For the first time in her life, Read lived life as a woman. She and her new husband lived happily until his tragic death, at which time Read again returned to military service disguised as a man, using her husband’s clothes. But the military had lost its spark to Read, so she quit and boarded a ship bound for the West Indies.

While at sea, Read’s ship was attacked and captured by the notorious pirate “Calico” Jack Rackham and his companion, the female pirate Anne Bonney.

Read, still dressed as a man, was soon recruited to Rackham’s crew where she became familiar with Bonny. She and Bonny became close companions, and one day Bonney walked in on Read undressing and thus accidentally discovered her secret. The two women did quickly become close friends, and Bonney swore not to reveal that Read was really a woman. However, Read’s true gender did not remain hidden for long. Rackham became suspicious of Bonny’s close relationship with the new sailor and demanded an explanation, whereupon Read confessed that she was actually a woman. Rackham allowed her to stay on as a member of his crew.

Rackham shortly thereafter revealed to his crew that Read was female, but it seems to have had no negative effect on her service on board the ship and she is accepted as Bonney has been.