There are a variety of swords and bladed weapons available in the 18th century.  New steel techniques have made good quality weapons affordable even as many of the old style swordsmiths are dying off.
Styles in blades range from the latest fashion to old hand me downs and ancient heirlooms.  Practical considerations, as well as fashion, have lead to a trend of smaller and lighter blades.  As body armor has declined, largely due to the widespread use of firearms, the need for heavy battle blades to beat through layers of plate and mail has also faded.  While combat in the close confines of a ship does not lend itself to the forty plus inch rapiers of a generation earlier.
Munition Grade weapons, the plain, unadorned arms that governments buy in bulk to equip their armies, are widely available and are the type represented in the price lists.
With a few exceptions, the best weapons (both blades and guns) come from Europe.  Local versions tend to be of lower quality steel, often recycled from other tools and weapons, and of simpler design.  (As noted there are exceptions. Some local craftsmen are extrordinary.  Fine weapons are produced in India, Arabia, Africa, Turkey, China and Japan, to name a few places.)

Prices for these weapons are found here: Blade Prices

Broadswords
‘Broadsword’ is a widely misused term.  Most of the weapons described as broadswords are not, and instead have their own proper identifier.  The Scottish Claymore is one of the few weapons that are properly identified as a broadsword.  Primarily an infantry weapon it was widely used in the various Rebellions and remains a popular weapon amongst Scottish emigrees and outlaws.   Claymores are rarely munition grade weapons, most are ornamented with family or clan crests. 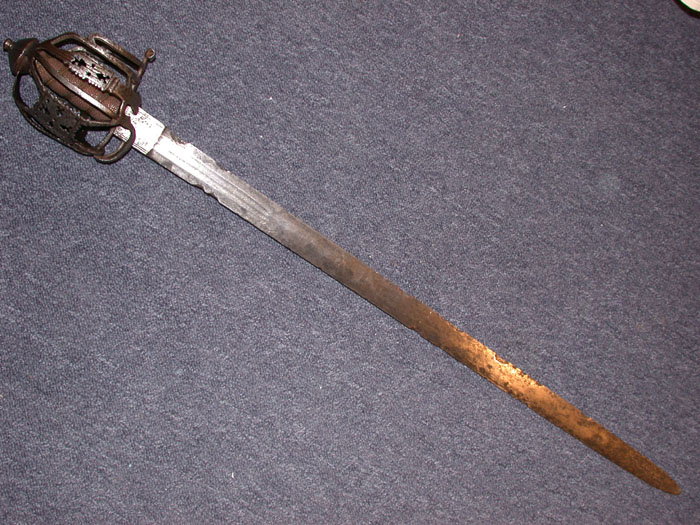 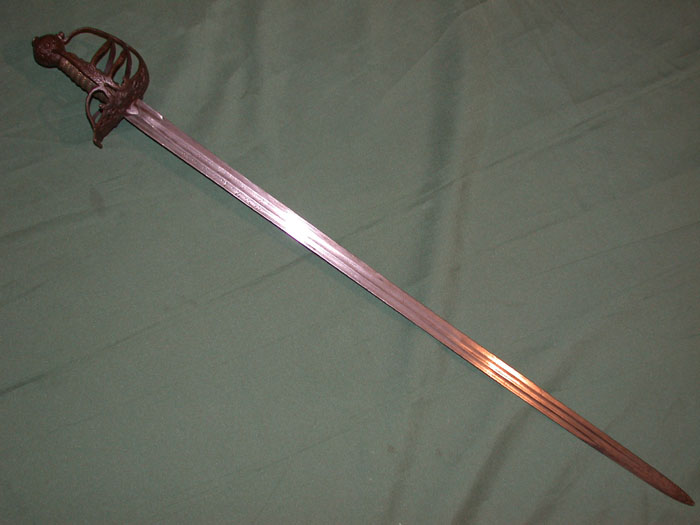 Mortuary Swords
The Mortuary swords, while arguably not a true broadsword, comes close to the ideal and is generally considered one.  A bit longer then a claymore it is popular, though slightly dated, weapon on the Continent.  Many Mortuary swords are munition grade, having been made for one or another European army.

Back Sword
The Back sword was widely used through the English Civil War and is a popular cavalry weapon.  A straight, single edged weapon that is about the same length as a Mortuary sword.

Rapiers
The long, slim rapier is a weapon of speed and skill.  Averaging anywhere from three to four feet in length rapiers come in several varieties.
Point no edge.  These rapiers are a purely thrust and stab weapon.  Other then slight cuts with the point there is no effective slashing attack with these weapons.
Point single edge.  Much like a longer, slimmer, lighter backsword, these weapons allow a slashing attack with one edge.  Often the sharpened edge only runs part of the blade’s length.
Point double edge.  A slimmed down Mortuary sword, these rapiers are double edged for at least half their length back from the point.
Rapiers are primarily intended for single combat, one on one in a test of skill and speed.  In the crush of general melee where weapons as diverse as boarding axes, sabers, cutlasses and claymores are at play the long, slim blade can be a liability as much as an asset.  It is essential to use the rapier to deflect an opponent’s attack, not block it.  A powerful blow from a heavy weapon can snap a rapier if it is incorrectly parried.
Rapiers are not commonly used by soldiers on a battlefield, though some officers do favor them, as such munition grade rapiers are rare. 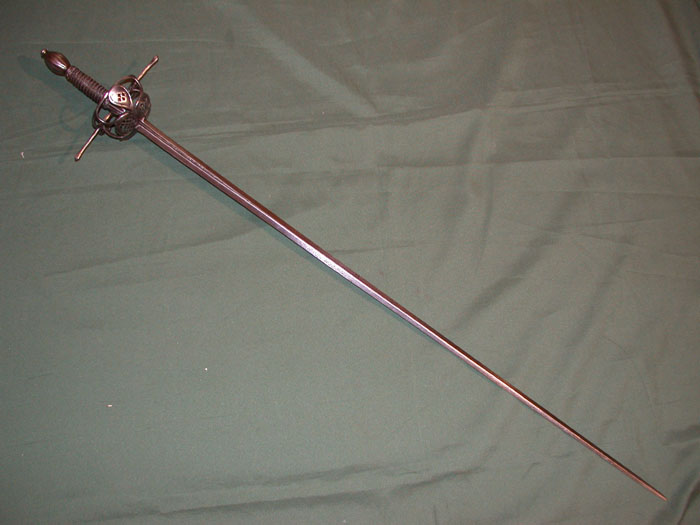 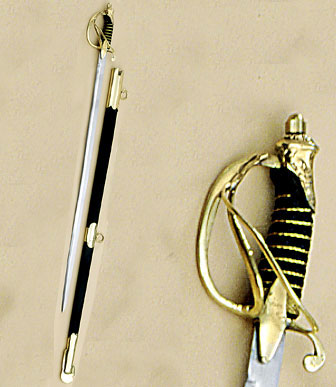 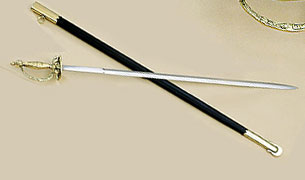 Small Swords
Custom and fashions change.  Many men grew tired of lugging the long, dirt dragging rapiers and began to favor a shorter, though still rapier like weapon, the Smallsword.
The smallsword is double edged down most of its length and its combat style is similar to that of a rapier but the blade is a bit thicker near the hilt and less prone to breakage from a powerful blow from a heavy weapon.
Many smallswords are heavily ornamented and are as much a piece of jewelry as a weapon.  Fashion dictates that a man wear a sword, it does not always follow that he knows how to use it.

Saber
The saber has a variety of forms but all have similar characteristics. A one handed, curved, single edged, long, relatively narrow blade often with a blunted point.  The saber is almost exclusively a slashing weapon and is widely used by cavalry.  Infantry versions do exist, the blade tends to be straighter and is more likely to have a point then the horseman’s weapon.
The saber is narrower and somewhat longer then a cutlass and much longer then a hanger. 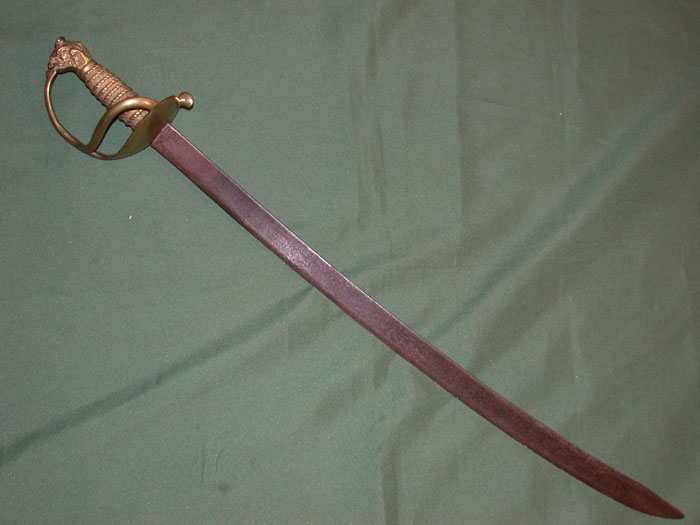 Hanger
The Hanger resembles a cut down saber and is issued to common soldiers as a back up weapon and is used by some big game hunters as a weapon of last resort or to finish off wounded game.
The hanger has a short, single edged blade that is straighter then most sabers and thinner then a cutlass and usually has more of a point then a saber.
Hangers are standard equipment in most European armies, therefore munition grade weapons are widely available.

Cutlass
The cutlass is believed to have evolved from the long ‘Boucan’ knives  (See below) used by the early Buccaneers to slaughter and butcher pigs and cattle.   The cutlass has developed into a weapon of intermediate length between the saber and hanger, with a wider, heavier blade, a single edge and sharp point.  One common, though not universal, characteristic of the cutlass is the solid basket or cup hilt.
Munition grade cutlasses are common, the typical cutlass in a mercant ship’s arms locker is not a shiny brass or silvered weapon but one of the plainer ‘common’ weapons.

There are a few other styles of weapon that are called ‘cutlass’ and though they have characteristics of a cutlass they are different.

Eastern Cutlass
This is more properly a type of Scimitar, but when it is fitted with a cutlass style basket hilt it is called a cutlass.  These weapons, along with a few other styles of balde, have slipped into use by pirates by way of the Barbary Corairs and local contacts in and around Madagascar and the East.
Heavier and a bit longer then a standard cutlass they are oddly balanced and to someone unfamiliar with the weapon they can be slow to recover. 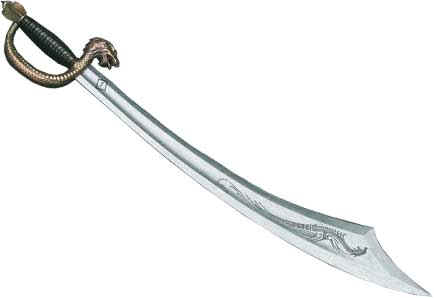 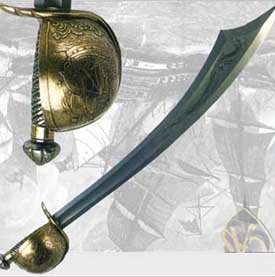 Caribbean Cutlass
Another varient weapon given the name cutlass.  These are locally made, in the Colonies, by local craftsmen using salvaged metals and other local materials.  Some would say that these are more closely related to the origins of the cutlass then the common version made in Europe.
The Caribbean Cutlass (or Island Cutlass) is inexpensive and fairly common amongst locals, escaped slaves and as secret contraband weapons. 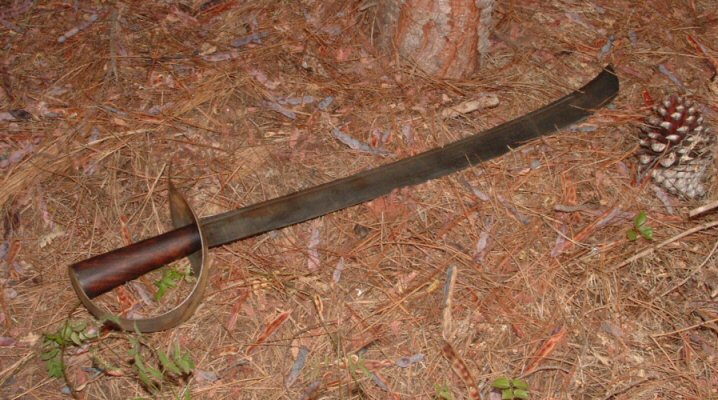 Exotic Swords
Various weapons come into pirate and merchant hands via trade and plunder,  The Barbary Corsairs are a common source of such exotics and from them come most of the Tulwars and Arab Saifs.

Tulwar
A Moorish or Ottoman saber primarily for cavalry use.  The blade is a bit wider and heavier then a European weapon and does not have a pronounced point.  The curve is similar to a European cavalry saber.
The hilt of the Tulwar (and most Eastern swords) is simpler and lacks the basket or elaborate hand guards found on European weapons.  Indian Talwars, though similar in blade to a Moorish Tulwar, do have more of a hand guard.
Like European swords, Tulwars and their kin are often bejeweled and gilded. 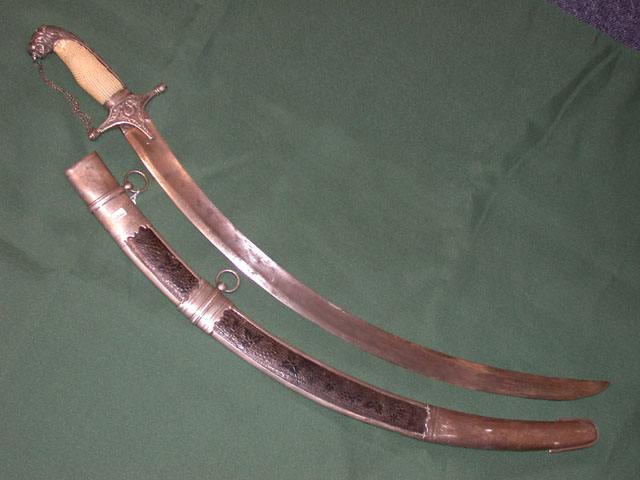 Saif
An Arab sword, closely related to the Tulwars but with a lighter, narrower blade that tapers to more of a point. 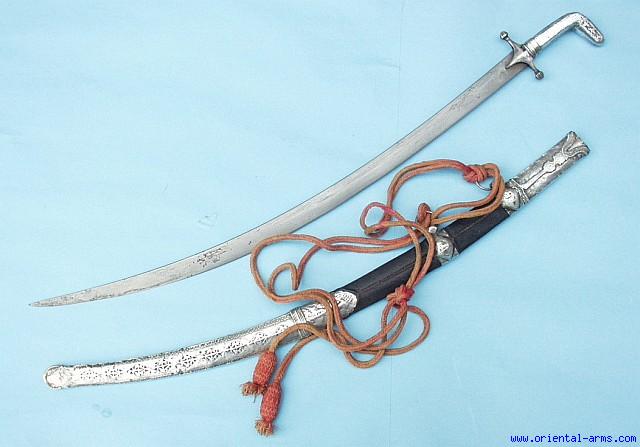 Swords are not the only hand weapon used on ships.  In fact sabers and cutlasses, though often carried by officers, are far out numbered by the more common, and versital, Boarding Axe.

Boarding Axe
The Boarding axe is found in every ship’s arms locker.  Not only is it a fighteningly effective and brutal weapon, but it is valuable for battering down doors and smashing open chests and hatches, and it is indispensible when it comes to clearing away wreckage and debris.  It can also chop wood and on land fell and shape trees and lumber when needed.
Boarding axes come in a variety of styles and types largely dependent on where they were made. 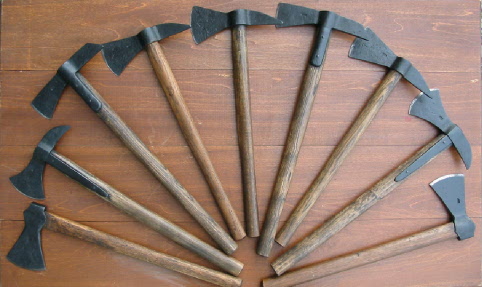 Throwing Axe or Hawk
Light axes or hatchets, suitable for tools and weapons, are a major trade item for dealing with the native tribes when trading for furs and skins. The light axe, suitable for throwing, or ‘Hawk’ is shipped to the colonies by the barrel full.  Many find their way into the hands of pirates and for sale in distant island ports.

Boarding Pikes
Not all the weapons are short arms.  The Boarding Pike, a descendant of the spear and a shorter cousin of the long Pikes of the European battlefields in the century past, is found on virtually all ships.  Its length gives it great adavantage in holding off boarders  and it also finds use in fending off ships and objects likely to collide with the hull,  spearing or gaffing fish  and even as a harpoon when needed. 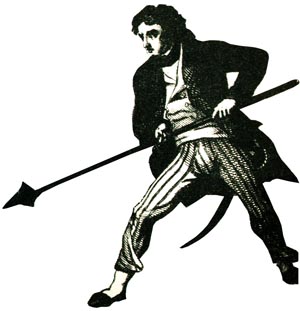 Boarding Pike in use 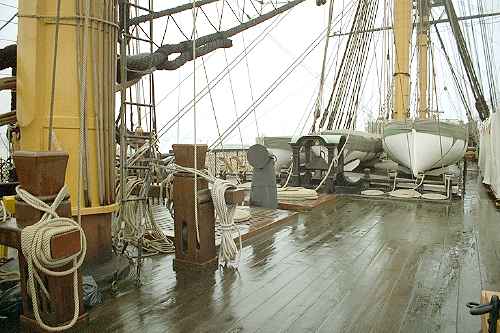 Pikes racked around the mast (left side)

Knives, Daggers and Dirks
Every sialor carries a knife.  It is an absolutely essential tool on a ship.  It usually isn’t a big knife, smaller blades tend to be handier when working, but it is a good solid blade.
Folding pocket knives, from small pen knives to larger blades are common.  So are single edged sheath knives.  Double edged daggers and dirks are not a regular tool, but most sailors have one even if they keep it in their sea chest most of the time. 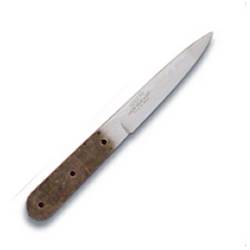 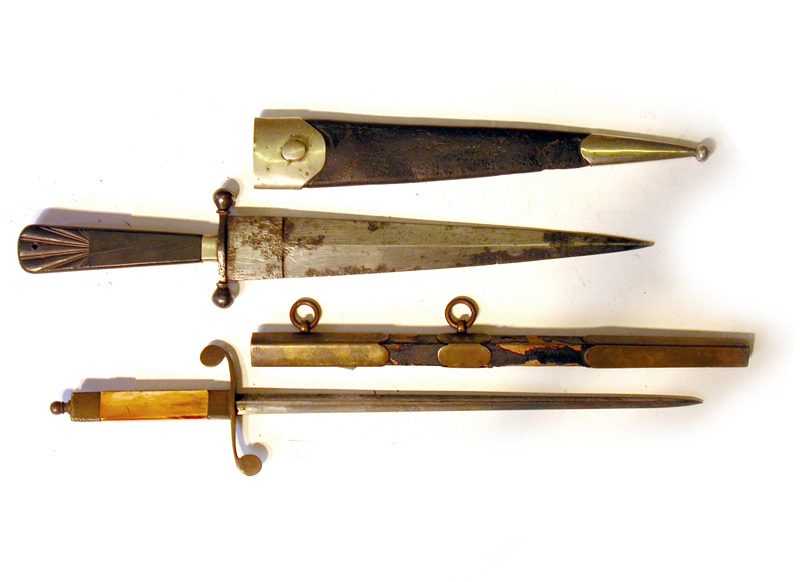 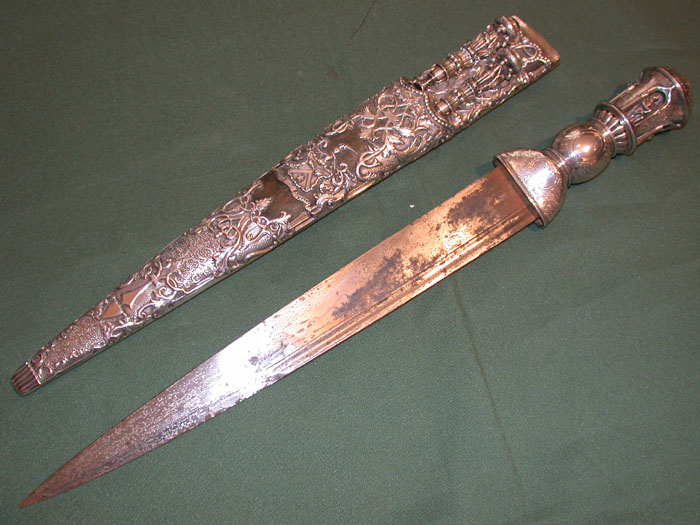 Other cultural knives are sometimes employed 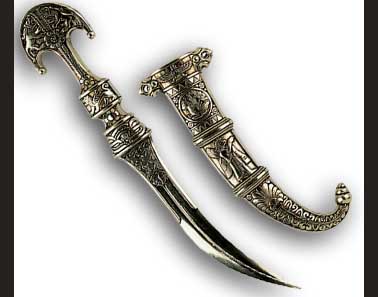 Stiletto
The Stiletto is not a tool.  It is a weapon.  Originally designed to slip between the chinks of armor its long narrow blade inflicts innocuous looking wounds that penetrate deep into vital organs. 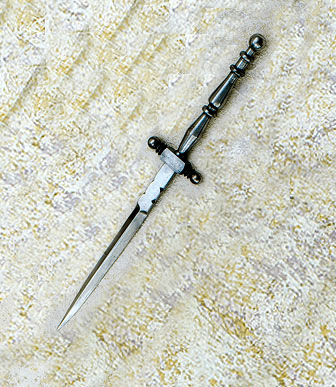 The famed ‘Boucan’ knife that was originally made by the old Buccaneers is a heavy bladed weapon generally made from a broken or cut down saber or hanger. The heft and weight of the Boucan made it an asset in slaughtering and dressing the wild cattle and hogs that the Buccaneers based their livelihood on. The heavy blade let it hack through bone and sinew like a cleaver, without the unwieldy length of the original sword .

The Boucan knife typically retains the hilt of the sword it is made from, while the blade length can vary from ten inches to twenty inches. They are very common in Jamaica, Santa Domingo, Cuba and Hispaniola and through out the Caribbean islands.