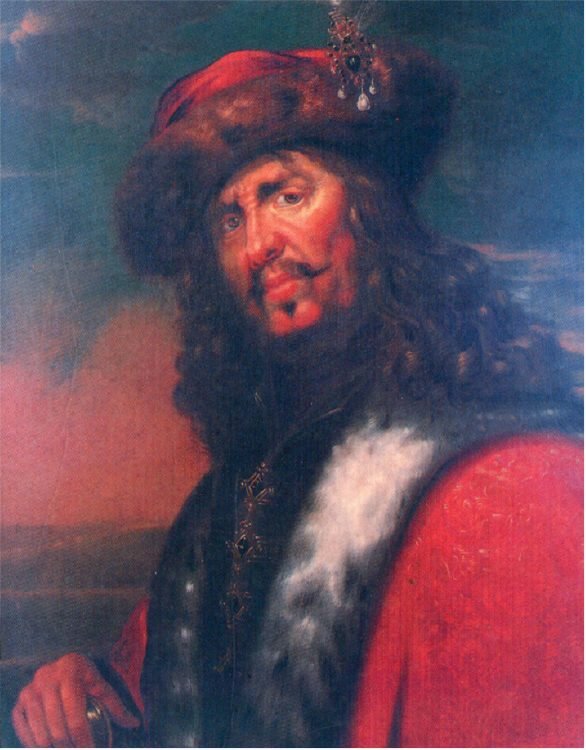 Roberts is a highly respected leader amongst the pirate community. His crew are in awe of his courage and willingly follow him into battles that appear hopeless.

Born John Roberts he later changed his name to Bartholomew Roberts. He went to sea at the age of 13 in 1695 but there is no further record of him until 1716, when he was third mate aboard the slave ship Princess of London, under Captain Abraham Plumb. In early June that year the Princess was anchored at Annamaboa, which is situated along the Gold Coast of West Africa (present-day Ghana), when she was captured by pirates. The pirates were in two ships, the Royal Rover and the Royal James, and were led by captain Howell Davis. Davis, like Roberts, was a Welshman, Several of the crew of the Princess of London were forced to join the pirates, including Roberts. Davis quickly discovered Roberts’ abilities as a navigator and took to consulting him. Roberts is said to have initially been reluctant to become a pirate, but soon came to see the advantages of his new life. Roberts has said:

“In an honest service there is thin commons, low wages, and hard labour. In this, plenty and satiety, pleasure and ease, liberty and power; and who would not balance creditor on this side, when all the hazard that is run for it, at worst is only a sour look or two at choking? No, a merry life and a short one shall be my motto.”

A few weeks later the Royal James had to be abandoned because of worm damage. The Royal Rover headed for the Isle of Princes. Davis hoisted the flags of a British man-of-war, and was allowed to enter the harbour. After a few days Davis invited the governor to lunch on board his ship, intending to hold him hostage for a ransom. As Davis had to send boats to collect the governor, he was invited to call at the fort for a glass of wine first. The Portuguese had by now discovered that their visitors were pirates, and on the way to the fort Davis’ party were ambushed and Davis himself shot dead.

A new captain now had to be elected. Davis’ crew was divided into “Lords” and “Commons”, and it was the “Lords” who had the right to propose a name to the remainder of the crew. Within six weeks of his capture, Roberts was elected captain.

Roberts accepted the Honour, saying, that “since he had dipp’d his Hands in Muddy Water, and must be a Pyrate, it was better being a Commander than a common Man.”

His first act as captain was to lead the crew back to Príncipe to avenge the death of Captain Davis. Roberts and his crew sprang onto the island in the darkness of night, killed a large portion of the male population, and stole all items of value that they could carry away. Soon afterwards he captured a Dutch Guineaman, then two days later an English ship called the Experiment. While the ship took on water and provisions at Anamboe, a vote was taken on whether the next voyage should be to the East Indies or to Brazil and the West Indies. The vote was for Brazil.

The combination of bravery and success that marked this adventure cemented most of the crew’s loyalty to Roberts. They concluded that he was “pistol proof” and that they had much to gain by staying with him.

They then spent about nine weeks off the Brazilian coast, but saw no ships. They were about to leave for the West Indies when they encountered a fleet of 42 Portuguese ships in the Todos os Santos’ Bay, waiting for two men-of-war of 70 guns each to escort them to Lisbon. Roberts took one of the vessels, and ordered her master to point out the richest ship in the fleet. He pointed out a ship of 40 guns and a crew of 170, which Roberts and his men boarded and captured. The ship proved to contain 40,000 gold moidors and jewelry including a cross set with diamonds, designed for the King of Portugal.

A few weeks later they headed for the River Surinam, where they captured a sloop. When a brigantine was sighted, Roberts took forty men to pursue it in the sloop, leaving Walter Kennedy in command of the Rover. The sloop became wind-bound for eight days, and when Roberts and his men were finally able to return, they discovered that Kennedy had sailed off with the Rover and what remained of the loot.  Roberts and his crew renamed their sloop the Fortune and agreed new articles, which they swore on a Bible to uphold.

In late February 1717 they were joined by the French pirate Montigny la Palisse in another sloop, the Sea King. The inhabitants of Barbados equipped two well-armed ships, the Summerset and the Philipa, to try to put an end to the pirate menace. On 26 February they encountered the two pirate sloops. The Sea King quickly fled, and after sustaining considerable damage the Fortune broke off the engagement and was able to escape. Roberts headed for Dominica to repair the sloop, with twenty of his crew dying of their wounds on the voyage. There were also two sloops from Martinique out searching for the pirates, and Roberts swore vengeance against the inhabitants of Barbados and Martinique. He had a new flag made with a drawing of himself standing upon 2 skulls, one labelled ABH (A Barbadian’s Head) and the other AMH (A Martiniquian’s Head).

The Fortune now headed northwards towards Newfoundland. After capturing a number of ships around the Newfoundland banks Roberts raided the harbour of Ferryland, capturing a dozen vessels. On 21 June he attacked the larger harbour of Trepassey, sailing in with black flags flying. All the ships in the harbour were abandoned by their panic-stricken captains and crews, and the pirates were masters of Trepassey without any resistance being offered. Roberts had captured 22 ships. One brig from Bristol was taken over by the pirates to replace the sloop Fortune and fitted out with 16 guns. When the pirates left in late June, all the other vessels in the harbour were set on fire. During July, Roberts captured nine or ten French ships and commandeered one of them, fitting her with 26 cannons and changing her name to the Good Fortune. With this more powerful ship, the pirates captured many more vessels before heading south for the West Indies.

Roberts has had no trouble replenishing his crew.  The ‘Good Fortune’ with 26 guns, has a crew of 120.