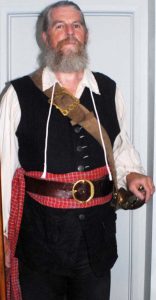 Captain Benjamin Hornigold, was an English pirate. His ship has been the starting point for several better known pirates. Like many Caribbean pirates, Hornigold served previously on an English privateer during the War of Spanish Succession.

Hornigold was known for being less vicious than most. One of his victims told how his ship had been pursued by Hornigold’s. Eventually they struck their colours and the pirates boarded. Hornigold, somewhat apologetically, simply asked the crewmen for their hats. He explained that the pirates had got drunk the night before and thrown their own hats overboard. Having got what he wanted, Hornigold left the vessel in peace.

Hornigold was one of the original ‘Founders’ of the Pirate Republic on New Providence where he ruled as ‘Governor’ and enjoyed the pick of the new recruits, including one Edward Teach.  When Hornigold left New Providence it was with Teach (later known as Blackbeard) among his crew. When he captured a sloop, he placed her under Teach’s command. In 1717 they plundered six ships off the American coast and raided in the Caribbean. By the year’s end Hornigold and Teach had captured a French slave ship, the ‘Concorde’ laden with gold, jewels, and other booty from a successful slave voyage.  After dividing the spoils, and giving Teach the Concorde (which he renamed the Queen Anne’s Revenge) they parted company.

Blackbeard went to North America, and Hornigold sailed to New Providence. When Woodes Rogers was appointed royal governor of the Bahamas, Captain Hornigold requested and received a pardon.  At that point Rogers commissioned him to hunt down pirates.
Hornigold commands his old 36 gun two masted sloop ‘Ranger’ with a crew of 123.