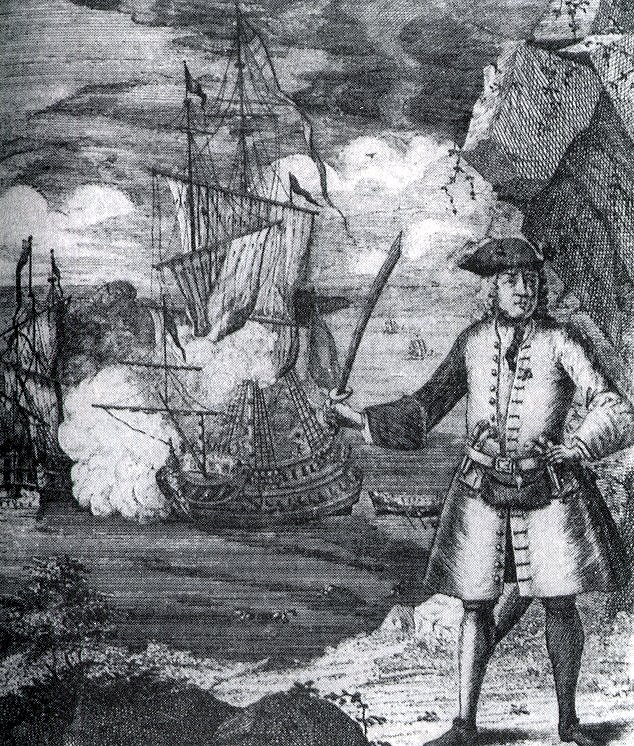 Henry Every or Avery (born c. 1653 in Plymouth, disappeared from record 1696) was a pirate whose aliases included John Avary, Long Ben, and Benjamin Bridgeman. He is most famous for being apparently one of the few major pirate captains to retire with his loot without being arrested or killed in battle.

Avery was a sailor from youth, serving on various Royal Navy ships. Accounts of uncertain veracity place him aboard the English fleet bombarding Algiers in 1671, buccaneering in the Caribbean Sea, and captaining a logwood freighter. By the early 1690s he had entered the Atlantic slave trade, in which he was known to buy slaves on the West African coast, then seize the slave traders themselves and chain them in his ship’s hold alongside their former captives.

Avery only made one voyage in his capacity as a pirate captain. But in that single journey he succeeded in committing, as Fraser puts it, “the single richest crime in history.”

Avery began his sojourn of piracy in 1694 when he helped a crew of Spaniards on board the 46-gun privateer Charles II, mutiny. After being elected captain he re-christened the ship Fancy and had her razeed.

In August, 1694, Avery and the Fancy reached the Mandab Strait, where he teamed up with four other pirate ships, including Thomas Tew’s sloop Amity. Although a 25-ship Mughal convoy bound for India eluded the pirate fleet during the night, the following day they encountered the greatest ship in Aurangzeb’s fleet, the Ganj-I-Sawai, and its escort Fateh Muhammed.

Avery and his men attacked the Fateh Muhammed, and Avery’s pirates sacked the ship for £50,000 worth of treasure.

Avery now sailed in pursuit of the Ganj-I-Sawai. Avery’s broadside shot away his enemy’s mainmast and the Fancy drew alongside the Ganj-I-Sawai and the pirates clambered aboard.

A ferocious hand-to-hand battle ensued, in which Avery’s outnumbered crew lost 20 men. However, the superior Indian force was let down by its leader who rushed below and hid among his concubines. After two hours of fierce but leaderless resistance, the Indians surrendered.

The victorious pirates then subjected their captives to several days of horror, raping and murdering prisoners at will, and using torture to force them to reveal the location of the ships’ treasure. Some of the Muslim women committed suicide to avoid violation or humiliation. Those women who did not kill themselves or die from the pirates’ brutality were taken aboard the Fancy. The other survivors were left aboard their ships, which the pirates set free.

The loot from the Ganj-I-Sawai totalled between £325,000 and £600,000, including 500,000 gold and silver pieces. Avery and the surviving pirate captains set sail for Reunion, where they shared out £1,000 and some gemstones to every man in the crew.

Avery and the Fancy parted from their allies at Reunion. They set course for Nassau in the Bahamas. At Sao Tome he stopped to take on supplies, defrauding the Portuguese sellers. The Fancy’s next stop was St. Thomas. where the pirates sold some of their booty. Finally they reached Nassau, where they bribed Governor Nicholas Trott to give them refuge.

Unable to buy a pardon from Trott or from the governor of Jamaica, Avery’s crew split up, some heading to North America, while the majority, including Avery, returned to Britain aboard the sloop Isaac, landing in Ireland. The female prisoners were not aboard, and it is unknown whether they escaped, were released, or were murdered. Although 24 of his men were caught, many soon after disembarking. Avery was never seen again.

The plunder of Aurangzeb’s treasure ship had serious consequences for the British East India Company. The furious Mughal emperor closed four of the company’s factories in India and imprisoned their officers, blaming them for their countryman’s robberies and murders. To appease Aurangzeb, Parliament have exempted Avery from all of the several pardons and amnesties it has subsequently issue to pirates. It was partly the hope of catching Avery that several of England’s most powerful Whigs to commissioned Captain William Kidd to hunt down pirates in the Indian Ocean.

Avery’s Flag
Avery first flew a red flag with four silver chevrons but later he switched to a black one with a more traditional insignia.

(Some scholars dispute that the black flag really is Avery’s, but no further information is available concerning the original red flag.)