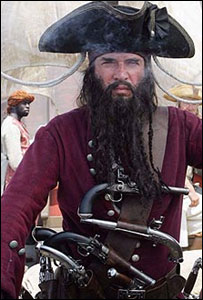 Known to his victims as ‘Blackbeard’ to his fellow pirates as ‘Thatch’ and to the Royal Navy as Edward Teach, this pirate competes with only a handful of others for the title of the most ruthless and blood thirsty pirate in the Caribbean.
Formerly the Quarter Master for the pirate Captain Benjamin Hornigold, Thatch has only been an independent captain for about two years. During that time has earned a reputation for personal courage, daring, ruthlessness, charismatic leadership and a keen intellect as well as bouts of erratic and violent behavior. His early history is murky. Originally from Bristol he is in his late thirties or early forties. He served as a privateer on several ships during the War of the Spanish Succession before disappearing into the Jamaican hinterlands for a year or so. He reappeared as part of Hornigold’s crew and was present when Hornigold captured the slave ship La Concorde near the island of Martinique. Hornigold gave the ship to Thatch who renamed her ‘Queen Annes Revenge’ and promptly modified her to allow more guns.

Blackbeard, as he soon came to be known to the shipping community and the public at large, spent his time ashore in Port Royal, and later in New Providence, as the Chief Magistrate of the Privateer Republic, helping to settle disputes between the various Captains and crew members. He could be found holding court under a large wild fig tree, a barrel of wine or rum beside him. He would command passerbys to drink with him and if they refused he would sometimes shoot them.

Thatch’s ruthlessness and erratic behavior is widely discussed amongst the pirates, though never in the presence of Blackbeard or any of his men, and is a matter of much rumour and speculation. One story tells that one day at sea he said to a few of his men, “come, let us make a hell of our own, and try how long we can bear it.” He took them below, closed up the hatches and set on fire several pots filled with brimstone and other acrid matter. One by one, close to suffocation, the men were forced to seek the upper deck. Blackbeard held out the longest and was quite pleased to announce that “he was better fitted to live in hell than the others.”

Then there was the time while drinking with his sailing master, Israel Hands and his pilot Marshall, he drew two pistols, crossed them under the table and fired, apparently at random.  Hands was shot through the knee.  When asked why he had done this, Thatch said, “Damn you all! Unless I now and then kill one of my men, they will forget who I am”.    (Shortly after this Israel Hands left Thatch to sail with Flint.)
Blackbeard is no stranger to killing his own men.  During one cruise, he punished some mutinous crew members by marooning them on Dead Man’s Chest, a small remote island in the British Virgin Islands chain, without water or landing places. Each was given a cutlass and a bottle of rum and Teach’s hope was that they would kill each other, but when he returned at the end of 30 days he found that 15 had survived.
Blackbeard’s practice of braiding burning slow match into his beard is considered by most a colorful method of intimidation.  Some whisper that there are more sinister reasons, though none are willing to talk about it in any detail, merely making a sign of protection from evil before taking a stout drink.

There are dark rumors about Thatch.  Rumors that he is an initiate in the secrets of Vodoun, a Bokor (Boccur) who has bound himself, and his crew, to the Baron Samedi and through this has gained powers that make your blood run cold.

Blackbeard’s ship, the ‘Queen Anne’s Revenge’ is a former slave ship, built in 1710, that has been modified to carry an extra twenty guns and now rates as  a 300-ton frigate armed with 40 guns.  It is one of the most powerful pirate ships in the Caribbean. 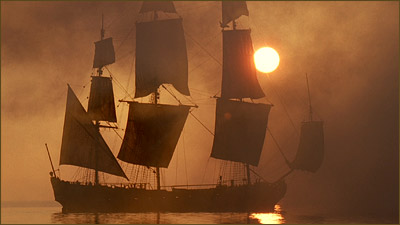 Blackbeard has, in addition to the Queen Anne’s Revenge, three other ships, an armed schooner and two sloops, with their own Captains, that sail under Thatch’s flag and follow his orders and share their plunder with him.  All told Thatch has about four hundred pirates under his command.  The principal crew members are as follows:

There are 45 other pirates in the crew of the Brindle

In total Blackbeard has 428 pirates under his command

Blackbeard has an alliance with another pirate captain, Stede Bonnet, and they often sail together and cooperate in large raids.