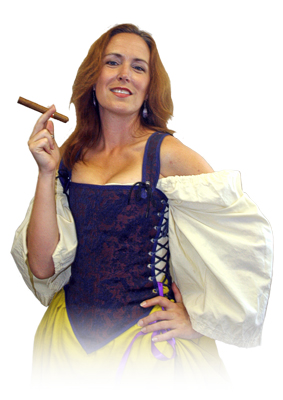 Anne Bonny, was born in County Cork, Ireland, was a daughter of attorney William Cormac and his maidservant. Her mother was named either Mary or Peg Brennan. When the affair became public, Cormac, with his new wife and newborn child, left Ireland for Charleston, South Carolina, where he made a fortune and bought a large plantation.

Bonny is intelligent, attractive, and quick-tempered. When she was 13, she stabbed a servant girl in the stomach with a table knife. At 16, she married a sailor and small-time pirate named James Bonny. James Bonny apparantly hoped to win possession of his wife’s family estate, but she was disowned by her father.

Anne started a fire on the plantation in retaliation. James Bonny then took his new bride to New Providence, where he became an informant for Governor Woodes Rogers.

Anne Bonny began mingling with pirates at the local drinking establishments, and met the pirate John “Calico Jack” Rackham, with whom she shortly thereafter had an affair. Rackham offered to buy her from her husband in a divorce-by-purchase, but James Bonny refused. He complained to the governor, who brought her before the court, naked, and sentenced her to be flogged and to return to her legal husband. Anne Bonny and Rackham instead eloped.